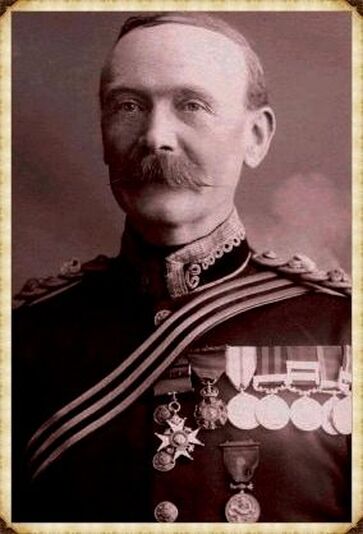 Lieutenant Colonel L. A. Waddell (1854-1938), was an exceptional English antiquarian, scholar and explorer. He was a polymath who spoke several oriental languages. He was also an expert on Tibet and the flora and fauna of India and Tibet. His major works concern the origin of the so-called Aryan race. His exemplary volumes on race and the origins of civilization are the following:
Prydain
The Welsh name for Britain. (Also see Pretan.)

Conn (and Gawain)
From Kan, Can, Gan, the second Sumerian king. He was also entitled Michael.

Zeus
From Sumerian or Aryan Zax.

Lord Sargon
Menes’ father was Kun or Kuni. This is Sha Kun, or Sargon. His mother was spoken of in the Puranas as Acchura Seni, wife of Sargon. Sargon referred to her as "Lady Ash." Sargon was also known as Gun, or Gin. According to Waddell he is the prototype for Sir Gawain of the Arthurian sagas.
King Menes
His ancestry was not clearly known. He is referred to in the Puranas of the Indo-Aryans as Asa Manj - the Far Shooter, a title which reminds us distinctly of the Biblical Saul and David, and also the Celtic Lugh. The term Asa, meant strong or valiant. In the Hindu Mahabharata Menes is Manasyu. Manasyu’s title was Prabhu, which comes from Paraa. This is the Egyptian Pharaoh. The Hindu word meant chief, or father, and Prah, means brother, that a relative.

The Royal Eye
King Menes was known as the "Royal Eye." This reminds us of the pictogram for Asur (Osiris) which showed an eye above a throne.

Cappadocia
The "Land of Beautiful Horses." In modern Turkey (Anatolia). Earlier known as Hatti, this land was the home of the Hittites. West of the Euphrates river. The earliest settlement of the Aryan kings, who may have come there from the Danube Valley. From here the kings established the Sumerian civilization. Mount Taurus stands to the south.

Gothic
Goth was a Roman term for the Gotts or “Men of the Goats,” namely, the Aryans.

Egypt
Settled or annexed by the early Sumerian kings who inspired its civilization during pre-dynastic times.

Aryan Civilization of the Near East
No Semitic Dynasties
Amorites
Aryan Legal Codes
The Sun Cross
The Serpent Cup
Celt
True meaning - from Khata, or Khalti, or Kheta, signifying white Syrians, or Babylonians, Sumerians, etc. The Catti. The term was misused and misapplied.